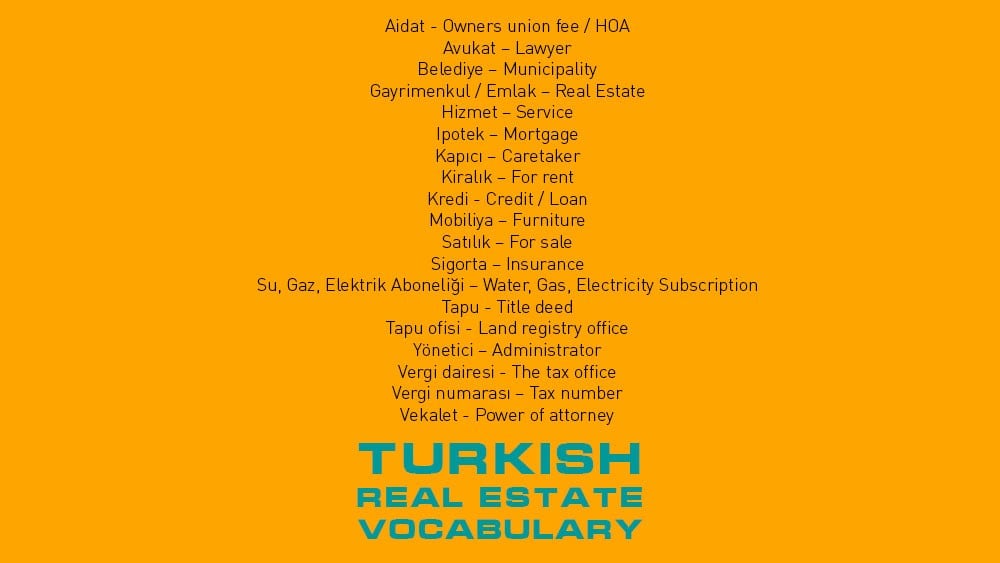 Purchasing a property in Turkey may be a challenge for a foreigner, especially when you face a language barrier. You may be spending your effort to learn some Turkish words, or even thinking about taking some lessons, which is great. Though if you consider the Turkish language as way too difficult, we are here to help you.

Some Facts and Information for the Very Beginning:

The Turkish Language is the most widely spoken of the Turkic languages, with a large amount of more than 200 million speakers around the world. Turkish is the national language of the Republic of Turkey. Outside its native land, there are also some significant smaller groups of speakers in other countries like Iraq, Syria, North Macedonia, Northern Cyprus, Greece, Bulgaria, and other parts of Europe and Central Asia. In the Ottoman Empire time language has gained a large collection of loanwords from Arabic and Persian Languages. While after the foundation of the modern state of Turkey and the script reform has been done. Turkish Language Association (TDK) was established in 1932 under the patronage of Mustafa Kemal Atatürk.

Turkish is a division of the Oghuz group of the Turkic language family. While in the nineteenth-century Ural-Altaic theory has grouped Turkish with Finnish, Hungarian, and Altaic languages, but still it is a controversial idea.

Modern standard Turkish is based on the dialect of Istanbul. This "Istanbul Turkish" (İstanbul Türkçesi) establishes the model of written and spoken Turkish. Thus Turkish has numerous local dialects and varieties across the regions, with many specific words and phrases.

Turkish is generally known as a challenging language. Most of the foreigners find it really hard to understand and even harder to speak.

Back to the Topic

When the topic is the real estate market in some parts of let’s say ‘’non-touristic’’ regions of Turkey, it can be hard to communicate with local people. Or, if you have already bought yourself a home, surely knowing some Turkish will be helpful for your everyday life.

This is why we have made a small vocabulary sample for property in Turkey that includes some of the Turkish words that are often used without being translated.

We hope you will find this list useful. For any further queries and clarifications please do not hesitate to contact our office where we will serve you a fully professional service with our experienced team speaking in many languages such as:

Get in touch with us!