What You Need to Know About Turkish Culture and Traditions

Turkish culture is a diverse and complex legacy that exists in a dynamic relationship with Anatolian, Eastern Mediterranean, Central Asian, and Islamic civilizations. Traditions and attitudes established throughout the Seljuk and Ottoman Empire periods are frequently carried on.

Turkey has long been seen as a tourist destination and seemed to be a bridge connecting the East with the Western world. With all of its Turkish traditions and culture, Turkey has undergone significant transformations. Economic professionals and specialists can shed light on the perceived differences in cultural dynamics and traditions from the East to the West.

Here are ten things you will undoubtedly experience during your visit to Turkey, as well as some cultural information. 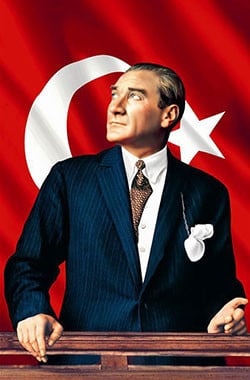 Turkey's citizens are proud of their nation and its history. Turkey celebrates public holidays, and at this time, flags may be seen fluttering in the windows and between the town streets. The Turkish flag has a very important place in Turkish culture.

Mustafa Kemal Atatürk, the great founder of The Republic of Turkey and settled the democratic system making the country modern and developing. Atatürk has many more important contributions to his country. He is known as the "Father of the Turks." If you visit Turkey, you will notice many statues and pictures of him and his pictures in public places, and also his face on the banknotes of Turkish Liras.

Breakfast is not only a meal in Turkey, it is a lifestyle! Nothing compares to the richness of a Turkish breakfast known as Kahvaltı. The term "Kahvaltı" is a combination of the terms "coffee" and "before." Because Turkish coffee has a strong flavour, it is recommended that you eat something before drinking it on an empty stomach. As a result, in Turkish culture, the word "Kahvaltı" means "before coffee." In Turkish culture, breakfast is a crucial meal.

Breakfast is difficult to conceive without tea. If you come to Turkey, prepare to drink a few cups of tea every day. Tea is a favourite beverage among Turks that wakes them up in the morning and brings them together late at night.

When ordering tea, specify that it be "rabbit blood" in colour and that it drinks with or without sugar.

Turkish coffee, made from very finely ground Arabica beans, has acquired worldwide approval for its robust flavour and unique preparation ways. It is often served with Turkish delight.

During a traditional engagement visit, the bride-to-be serves Turkish coffee to her guests. There is a tradition that he has to put some salt in the groom's cup and he has to drink the entire amount of salty coffee as a gesture of his feelings for her.

Since the 16th century in Turkey, coffeehouses have also been sites where shadow plays such as Karagöz and Hacivat were performed, and where the Ottoman Empire's oral culture was propagated. Coffeehouses are now renowned as gathering places for men to socialize, discuss politics, drink tea or coffee, and play backgammon and other card games. 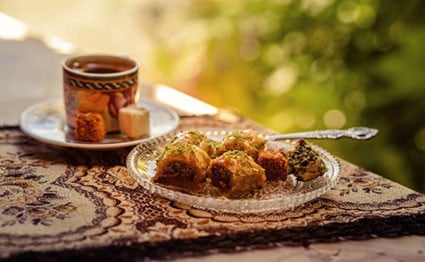 Baklava is a typical Turkish dessert that is enjoyed by many Turkish families. It is also an essential component of gatherings and festivities. Gaziantep, in southeastern Turkey, is known as the Baklava Capital.

Today, Turks can buy Baklava in stores, but most people still prefer to have it made at home by a skilled mother or grandmother. Baklava, a Middle Eastern delicacy, is made with pistachio, walnuts or hazelnuts.

This is a glass bead with a blue eye that has been used in Turkey for centuries. It literally means "evil gaze" and is said to protect against evil and, if all goes well, to prevent unpleasant consequences such as illness or just bad luck.

Nazar Boncuğu, also known as "The Eye of the Prophet" or the "Evil Eye", will be found in homes, offices, mansions, transportation and businesses wherever you go in Turkey to protect the owner from negative energy or the jealous stares of others. This amulet is believed to protect against evil and is currently one of the most popular souvenirs to buy in Turkey, and also holds an important place in Turkish culture, as it"s myth dates back to ancient times.

In Turkish culture, baths dating back to the ancient Romans stand out as locations where people socialize as a means of cleanliness and relaxation. Rather than steam, the Turkish bath focuses on hot and cold water. If you visit Hamam your body will be rubbed with soap bubbles, which gives a peeling effect. Additionally, a massage is given on request, particularly in tourist baths.

This custom, which originated in Roman public baths and was later slightly modified by the Turks, can now be divided into two parts. Some Turkish baths only cater to tourists. Then, the hamam can be used by representatives of both sexes, as tourists tend to use it in bathing suits, while other bathhouses traditionally meet the needs of the local community. Then the baths for men and women are 100% separated. One of the Turkish traditions is the so-called "Day", a weekly practice "only for women" including a visit to the baths.

Before the wedding, the women gather for the henna evening. Kına gecesi, or henna evening, is an important ritual steeped in tradition. It is a custom that takes place a day or two before the wedding in the bride's home, and only women participate in it. For this occasion, the bride is wearing a particularly beautiful red dress, usually decorated with gold embroidery and called a "bindallı". A happy married woman is to make henna, and a gold coin is put in the mixture, heralding wealth.

Turkish hospitality is part of their culture. Turks very often invite their family and friends to their homes for meals and they always offer hospitality to new people, especially travellers and people "in need". Slippers are provided for guests to leave their shoes outside the door (another common practice in Turkey), as well as huge amounts of food which it is rude to refuse. What's more, the Turks are very fierce. They like to celebrate, feast and eat. 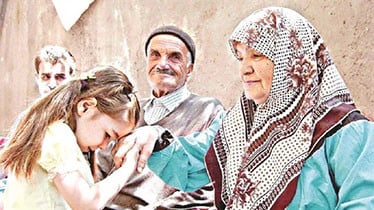 9. Turkish Greetings and Respect to Elderly

As for some phrases and greetings - in Turkey, when someone gets sick, the appropriate response is "Geçmiş Olsun" which means "well soon". When you enter the store, you may hear the phrase "Hoş Geldiniz" which means "welcome". The list of such polite phrases is long. Learning a few phrases will earn you a lot of respect.

The Turks highly value the elderly. Placing older people in care facilities is not welcome. Rather, their offspring are expected to look after them. On important days, such as the "bayram", Turks visit the elders, and each younger one kisses the elders hand and places him on his forehead as a sign of respect. Don't be surprised if you see strangers helping the elderly with grocery shopping or crossing the street. Young people are expected to give way to older people on the bus. It is rude not to do this.

Because Turks prefer close touch, personal space in Turkey is less than in other European countries. People frequently converse from a close distance, and they may lightly pat you on the back or touch your arm during the chat. Men and women can also be seen walking hand in hand or wrapping their arms around each other. However, unless they are in a love relationship, the opposite genders do not come into close touch.

Did you find this information useful? Are you curious about the lifestyle in Turkey? Continue to visit our site for additional news and details on Turkish culture, and traditions. We're all set to keep you up to date!

The following blogs may also be of interest to you: